This one’s hard to explain.  It’s one of those times when very disparate ideas come together. 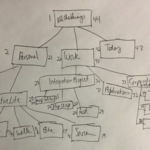 In my life as a developer, I’ve been preoccupied for the last little while developing a task management tool I actually like using.  It’s not easy because I use a technique called recursive deconstruction:  take one task and break it down into parts, then break down those parts into parts, and so on, and so on, until you’ve got a whole pile of little tasks you can take quick action on, pick up and put down within a few minutes.  Problem with most task management tools is there’s a limit to the recursion you can do – you can only ever break things down two, maybe three times and then you’re done. 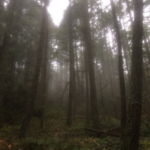 When I go trail running, I often get these beautiful views of the trees in the forest, receding into atmospheric perspective.  The effect is highlighted by the fog that often covers hillsides in the forests of the Pacific North West.  As the trees recede into real perspective, they also get smaller, which also happens to the space between them.  So the landscape becomes an illustration of the work I’m doing with recursion in my web development. 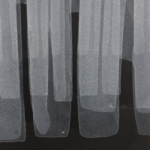 I’ve been looking for a way to paint landscapes without becoming a landscape painter.  What I’d like to learn to do is to evoke a sense of the landscapes in which I live that’s more than simply a photographic representation.  It’s more than emotion too.  There’s a deep logic to the landscapes in this part of the world that just feels right to me and which I’m not sure I’ll ever be able to articulate in words.  Hopefully I’ll get there visually though.

So really, this series is a bunch of ideas coming together at once.  I don’t quite think I’ve cracked the structure or method of these paintings yet, so I’m continuing to work on them in greyscale until I’ve got a little more confidence.  Take a look around the “Recursion Series”, and let me know what you think.